Jan has a current UEFA-A Coaching Licence, is the current Head of Coaching at FC Utrecht’s Youth Academy and Ambassador of World Soccer Partners.

Regarded by his peers as a highly experienced and professional coach, Jan has significant experience in youth football development as a result of his roles as:

Jan has significant global experience providing coach education, having presented at many conferences and supported clubs as a technical consultant. In addition, Jan has the ability to support opportunities and pathways for talent. He is passionate about supporting players and coaches to reach their potential, sharing his knowledge in an open, friendly manner. 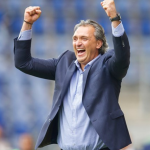